The Remains of the Dead (Ghost Dusters Mysteries, No. 1) 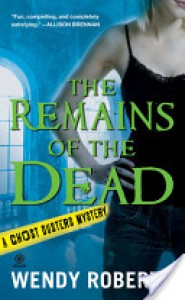 This is a re-read for me, but my first reading was long enough ago that I remembered very little of the story or the characters.  I needed a cleaning theme for a Bingo game, and this fit the bill.

This is the first book in the series, and the only one I've ever read, and picking it up again reminded me why.  I have quite a few cozy-reader-friends who adore this series, so perhaps it's just suffering from first-book-itus, but quite a few things about this story just struck me the wrong way.  Pretty much both of the biggies concerned the main character, Sadie.

Sadie is in the crime-scene cleaning business because 5 years previously her brother committed suicide and there wasn't anyone in the business, leaving it to her to clean up the aftermath.  She enjoys the part of her work that takes on this burden and keeps other families from having to deal with it themselves.  She also is gifted (?) with the ability to see those that have died and she helps them to pass on.  Her involvement in the mystery is due to one such ghost.

Sadie is still grieving her brother and the author does a very, very good job with her protracted grief.  But there's a whole side-story about Sadie's sister getting engaged, and Sadie's insistence that she's only marrying the man because he looks like their brother.  But he doesn't look anything like their brother and everyone tells her he looks nothing like their brother, but Sadie just won't budge.  I don't know, but to me, this is brainless behaviour for someone who is written as intelligently as Sadie.  Her too-long-lasting refusal to accept the reality of this just feels wrong.

The second thing I really didn't like was her fixation on who she thought was the murderer.  The author gives the reader so many clues (and, admittedly, one red herring) that I knew the murderer at least 2/3 of the way in.  Again, her fixation on the wrong person in spite of all the clues jumping up and down screaming "look at me!  look at me!" were beyond frustrating and downright irritating.  I don't like my heroines stupid or prone to fixations.

I'll have to ask around to see if this series improves with future books.  I like the characters and there was a little Sixth Sense moment that I thought was a nice touch.  I also like Zach and the future chemistry between them could be worth picking up another book.