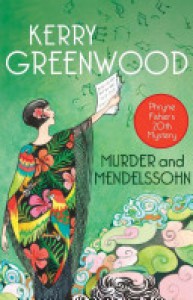 So for those who have never heard of Phryne Fisher - where to start?  A quick(ish) introduction I think.

Phryne Fisher is fabulous.  Intelligent, clever, strong, independent, confident, beautiful, rich.  With a minor title (honorable).  She is a bit like James Bond; well-educated, well-mannered, well-armed and very well-adventured.  There isn't anything she can't do.  Lethal if necessary, and with her own definition of morality.  She doesn't think twice about taking any available man that strikes her fancy to her boudoir.  Her wealth allows her the freedom to do as she pleases and what needs to be done.  She has surrounded herself with a family of her own creation - all of them saved from fates worse than death.  She is, in short, a variation of woman most women would be if they could choose to be.

A note too, about the author, Kerry Greenwood.  I've never met her and can only go by what I've read on her website, but she sounds like someone worth knowing.  She painstakingly researches what she puts in her books.  Indeed, her Phryne Fisher books are the only cozies in my library that come with bibliographies in the back.  So, entertainment and historical/cultural education.  She has chosen to frame all of the Phyrne adventures in 1929 with no chronological advancement and makes no apologies for it.  She sounds as fabulous as her creation.

Murder and Mendelssohn is the 20th Phryne Fisher mystery and, I think, the longest so far.  As is usual in most of the later books (if not all of them), there are several plots/mysteries running simultaneously.  The main one surrounds a choir's rehearsals for Elijah by Mendelssohn and their unfortunate difficulties in keeping a conductor.  The plot/mystery running in parallel is the appearance of an old friend from the WWI Western Front (she drove an ambulance; he was a doctor).  He's a companion now for a mathematician that is devoted to the science of deduction.  The two of them are, by Ms. Greenwood's own admission, written with a nod to Sherlock Holmes and Watson.

I could, honestly, go on forever about this book; it's rich in details, a lot of dialogue and things are always happening.  But I'm still getting the hang of 'in-depth' reviews so suffice it to say I loved reading it.  This series has been excellent from the word 'go' and Phryne's arrival on Australian shores.  Reading about Phryne is energising; her ability to manage, well, everything, verges on inspirational.  For me, she's the best kind of fictional character - a devastatingly capable, pragmatic heroine.

A word for any of those orthodox-cozy-readers out there - Phryne is tolerant, liberal and non-judgemental.  Her morals are not the morals of the conventional and neither are those of the people who find they need her help.  So don't pick up this book only to be scandalised by the part about two homosexual men, assuming you've made it that far and haven't become hopelessly offended over having the bible turned against your own (possibly) conservative beliefs.  You've been warned.