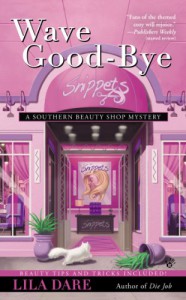 I'll admit I started off hating this book - I put it down and picked up a different book instead. The whole first chapter or two is her going out of her way to set herself up as a murder suspect while making herself sound as pathetic as possible.  It really felt like an example of 'how to write the worst cozy ever'.

I'm glad I stuck with it though - the book got better by 10 fold!  First, there's a scene with her new parakeet Sam that had me laughing out loud until tears came to my eyes. I don't want to ruin the story for anyone else so I'll stop there, but kudo's to the author for creativity and compassion in choosing a pet for your protagonist.

Really, the book was just excellent after those first couple of chapters. The murder mystery was very well done too - the author had me certain I knew who had to have killed Lisa, only to find out I was totally wrong.

As a lot of readers found out soon after this book was published, it was written by a different author than the first three (but still using the same pseudonym of course) and I think it really shows in the development of not only the characters themselves, but their relationships.  I was very happy with how this new author sorted out the romantic entanglements that had been up to this point, nothing but frustrating.

A good series and the pathetic-ness at the beginning aside, an excellent book!  I hope to see more from this new (and I think improved) Lila Dare.