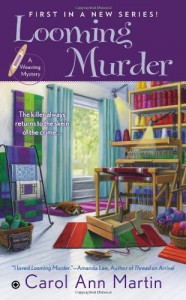 This first in a new series started off really strong, and I thought "yay!" a new series to get excited about. But from there - well, it sort of fell apart. Not completely - it was still a good enough read, but not nearly as good as it's potential.

First, the setting is excellent; small town, at the base of the blue ridge mountains. Most of the action takes place in only two places, so there's not much of a mind map setup, but it wasn't really missed and didn't detract from the story.

Next, the characters. We start with a charity weaving night that introduces us to the main characters and coincidentally, the suspects. I really liked the female dynamic and was all set for a good 'friendship' setup for the series. But the protagonist, Della, spends most of the book talking down to her "closest" new friend, Jenny, someone who believes she can read aura's and tarot. Della treats her as a bit of a silly child because of this, and it hurts the book.

Della was supposed to have been a Financial Analyst in her previous life, but seems to have no money of her own and needs to take advice from the men in her life about her own financial decisions. ?!?!  Plus, I was over hearing about the damn high heels.

Marnie is introduced as a bit of a shrew, but then becomes likeable as the book progresses. The final female character, Dolores, is portrayed as a nasty, scheming piece of work until the last third of the book where she becomes a bit of a hero in the piece. ?!?!

And finally, Michael - the childhood friend/love interest: He is an Ass!!!! One minute he's talking to Della like she's a child and constantly nagging at her and the next, he's blushing and running away from her at the slightest provocation. WTF??? Total turn-off.

All-in-all, the characters felt all over the place, I never knew how I was meant to feel about any of them (except Michael, whom I'm sure I am meant to like but really, I'd just like to kick him in the jewels...)

Finally, the plot. Very well done and wow, way to keep me completely distracted with lots of suspects and red herrings and then shock me at the end. Totally didn't have a clue until Della did. Excellent!

Not sure I'll read the next one or not - though I'll admit to finding the weaving bits very interesting. I'll have to see how I feel once the next book comes out.