Gone With the Woof (A Melanie Travis Mystery #16) 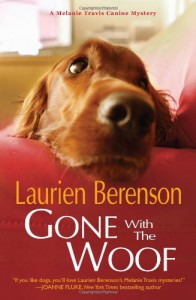 I've been a fan of this series since the first book came out years ago, and they're books I will occasionally re-read. I was certain the last book, Doggie Day Care Murder (Melanie Travis Mysteries, #15), was the last one, so I was pleasantly surprised when I saw the upcoming release of Gone With the Woof. I made sure to pre-order it and couldn't wait to revisit old friends.

For this long time fan, the story didn't disappoint. Melanie, Sam, Aunt Peg, Bertie - the gang is all here and are as likeable and delightful as ever. Aunt Peg is still bossy, Sam is still easy-going and Mel is still giving as good as she gets.

The plot is one involving the sins of a father and son and I thought it was well done. There was a pivotal moment in the book when I had the 'ah hah!' moment and knew who the killer was - but it happened towards the end of the book and nothing was really lost with the knowing.

I found the climax a little bit odd as there was no way the killer wasn't going to be caught so I don't know what motivated that final scene. But I enjoyed it all the same.

I don't know whether to look forward to another book or not? I certainly will be pleased if there is, but with 5 years in between this and the last, and after 16 books, I'm afraid to get my hopes up too high.