The Corpse at the Crystal Palace (Daisy Dalrymple Mystery, #23) 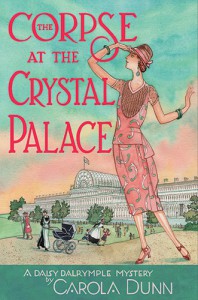 This is one of those series that's a reliable old friend for me.  Definitely cozy, a little bit frothy, and terribly innocent but never twee or precious, Dunn writes an historically accurate mystery that aims to offer a bit of harmless escapism.  She generally succeeds.

Daisy and her step-daughter Bel are entertaining some young cousins for a week at their home in London, and on the agenda is a day at the Crystal Palace. When Daisy finds out that neither the nanny nor the nurse have been there, she ends up with a large group outing on her hands.  Everyone splits off to explore the huge building and grounds, and when it's time to meet back up, Bel and her cousins spy Nanny Gilpin running out of the "Ladies conveniences" in pursuit of another nanny.  They cannot resist following her, playing spy, to see what's up, and it's all great fun until they find Mrs. Gilpin unconscious in one of the ponds.

Meanwhile, Daisy arrives at the rendezvous point to find the nurse and her twins, but no nanny.  After an appropriate amount of time has passed, Daisy goes off to the Ladies conveniences to find out what's holding up nanny's return.  Only instead she finds another nanny, dead.  When Mrs. Gilpin regains consciousness (the children having dragged her out of the pond), she can't, of course, remember anything.

And so begins another amateur investigator by Daisy, who is determined to find out why her heretofore grave, humourless but ultra responsible nanny would hare off and leave the twins, even if it was in care of the nurse.

Dunn has fun playing up the meddling Daisy does, lightly pitting her in a race against her husband, DCI Alex Fletcher.  Daisy has a knack for purposely putting herself in the right place at the right time, but rather than press the point and interrogate, she merely observes and listens, picking up information as she goes, so it really isn't meddling.  This along with her connections to the peers of the realm (she's an Honourable), gives her access to information faster than the police and makes her contributions valuable, though  it pains her husband to admit it.

The plotting of the mystery was so-so.  I should say, it was technically well done, but the motivation behind a couple of pivotal moments felt weak.  They worked, but only just.  This would probably be a crucial point in book 1, or any of the early entries, but by book 23 most readers are invested in the characters and will probably forgive a less than riveting plot for the chance to catch up with Daisy and her friends and family.  I did, anyway.