The Fast and the Furriest (Second Chance Cat Mystery, #5) 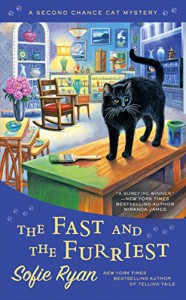 There was something about this book; I enjoyed it more than the last one, even though Ryan used more than a couple tried and true tropes.  Somehow she just made it work.

Sarah's friend and employee Mac, he of the simmering romantic tension and secret past, has just had his past come to visit.  When her dead body is found, Mac is, of course, the prime suspect.  Sarah's grandmother's friends kick in to gear to help dig Mac out of being rail-roaded for a crime he didn't commit.

As I said, tropes galore.  But Ryan makes subtle choices that perhaps make the story work: the seniors that investigate are actually licensed private detectives (or at least, one of them is, and the rest are legitimately working with him) and they always cooperate with law enforcement.  That's not to say there aren't a few moments where belief must be suspended (the final scene comes to mind), but for the most part, this isn't some insane slapstick caper.

I've been head down in a lot of historical fiction and popular science lately, and this was a nice, light break that offered a well plotted mystery to boot.  Just what I needed.