The Golden Age of Murder 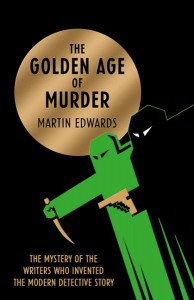 What started out strong for the first couple of parts, started struggling towards the middle and by the end it strongly resembled the book that was soon to follow it: The Story of Classic Crime in 100 Books; with paragraphs and chapters stuffed with titles and authors.

Still, it's all relative, because The Golden Age of Murder remains very readable and very interesting from start to finish.  It just wasn't as strong at the end as it was at the beginning and as a result, my 4 star rating of what I thought was going to be a 5 star read.

A few minor things did bother me though, in no particular order:

- Edwards assumes the reader knows their dates.  This reader is crap with dates, but excellent at reading comprehension, so usually an author gives a date and I can infer the dates of later events.  BUT Edwards bounces back and forth on the timeline, so he'll give a date, but then refer back to earlier events for a few paragraphs, then bounce ahead to future events, never stating any additional dates.  This became painfully irritating when he started discussing King Edward's abdication, as he bounced between events that happened before his coronation, after his abdication, during his reign, etc.

I should not need supplementary reading in order to make Edwards' narrative flow correctly.

- Edwards' bias for some authors over others is pretty obvious.  Which is ok - although I question how ok when someone is aiming to write an authoritative historical text.  His contempt for Christianna Brand is glaring and he's outright snarky about the Coles' political beliefs, coming just short of calling them hypocrites.  He seems to start out liking Anthony Berkeley, but by the end it's all pity, and perhaps a polite disgust (to be fair, I'm not sure there's much else to feel about Berkeley by the end, it sounds like his was a life wasted for want of a good psychiatrist).

He treated Christie the most objectively, and towards the end goes so far as to offer up some very rational theories for her 11 day disappearance, but at all times it's clear he has a lot of respect and admiration for her.  But Edwards saves the most blatant bias for Dorothy L. Sayers; I'd go so far as to speculate that he crushes on Sayers.  He's downright romantic about her throughout the book, constantly reminding the reader about her deep, dark secret and the heavy burden of guilt and responsibility she always carried with her, not to mention that drunken lout of a husband she had strung 'round her neck her whole life.  And that leads me to my last gripe:

- Towards the end, Edwards does that thing that drives me insane: he speculates ahead of the facts and presents it as truth.  It's not often (maybe he just rushed the end?), but several times he presents his interpretation of a book's themes, or an author's motivation, as truth without providing evidence.

The most egregious example was in the last chapter when he (again) tells the reader how big a burden Sayers carried with her throughout her life. I'm going to put the rest of it in a spoiler tag; skip the spoiler if you know nothing at all about Sayers and would like to find out for yourself, or if you just don't care that much about the whole thing, because I do go on and on.

He addresses the question: Why, after Mac finally adopted John Anthony, did she not bring John Anthony home to live with them?  He tells the reader it is her guilt and fear of public shame over her youthful indiscretion that prohibited her from doing so.

Nobody knows why she didn't bring him home, because she never once wrote about John Anthony or discussed John Anthony with anybody.  Ever.  Not even John Anthony.

But if I were in Sayers shoes, shame/guilt/embarrassment might have had a place in my reasoning, but they would be dwarfed by the fact that I was married to a great big alcoholic who suffered from great big mood swings and PTSD, and I was never home.  Edwards' romantic notions of self-flagellation via guilt and shame is nonsense.  A much more rational theory is that Sayers didn't want to pull John Anthony out of a happy home environment he was born into so she could stuff him in a house as dysfunctional and unhappy as the one she was living in, just so she could come out of the closet as a mom.

I don't doubt for a second that Martin Edwards knows his stuff - far, far better than I know it, but he's trying to make Sayers into a tragic, romantic heroine that frankly from what he's told me about her personality in this book, would sicken her if she heard it.  It's not logical to think that someone who was as pragmatic as Sayers was would suddenly go all romantic about her son.  By the time Mac stepped up, there was no chance of righting history, so why try?  Pragmatically, she did everything she legally could to legitimise John Anthony, and the best decision for John Anthony by that point was to let him keep the happy home he already had.  But that's just my opinion; for all anyone knows she might just have liked not having to be a mom in more than name.  We'll never know and it irritates me that Edwards claims he does.   ::end of rant::

Overall, an excellent book for anyone interested in the Golden Age of crime fiction, even if it does lose a bit of steam towards the end.  I'd unhesitatingly recommend it to mystery lovers who want to know more.  Or to those I think have TBRs that need beefing up!  ;-)