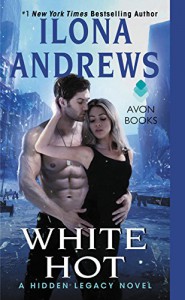 Well, that was exciting.  Still more urban fantasy than paranormal romance, but when the Andrews team decides to get down to the romance, they don't mess around.

The non-romance part of the story is fast-paced and exciting as hell; I woke up in the middle of the night last night and my first thought was "oh, I can start reading again!" and it was only through supreme effort (and pharmaceuticals) that I refrained from doing so.  But I did start up again at 8am this morning and didn't stop until it was finished.

I'm thoroughly enjoying watching all the characters come together; the team it took Kate more than 5 books to build up has only taken Nevada 2.  The only niggling thing I was a tiny bit disappointed in is the overall series arc: I sense shades of Roland.  And don't get me wrong, I love the Roland storyline in Kate Daniels, but if it's used here, it's going to feel repetitive; it's not the sort of plot device that wears well over time.

I have the third book and I have no idea how I'm not going to pick it up and devour it immediately.  But if I do than I have to wait who-knows-how-long until the 4th one is out. Curse you Ilona Andrews!

(I originally used the first book Burn for Me for my demon square, but it had a very scant mention of demons.  This book was much more demon-rich, so I've switched Burn For Me over to Supernatural, and I'm using this one for Demons.  No Bingos were altered in the switching.)