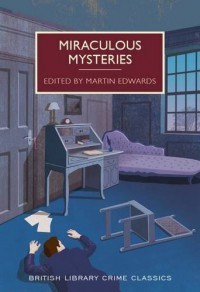 I've read three of the short stories in this collection so far, and I'd say 2 out of the three were excellent, with the third being worthy of note for just how transcendently bad it is.

The first story I read was, of course, Doyle's The Lost Special.  It wasn't a mystery in the sense of a puzzle to be solved, but instead as a solution presented after the fact.  Still, it was good and made better by the small touches that include a riff on Holmes' quote of "...when you have eliminated the impossible, whatever remains, however improbable, must be the truth..." and the small uncredited cameo Homes himself makes by way of 'an amateur reasoner of some celebrity'.  I must admit that I guessed how it was done, although not what the special's ultimate fate was.  Harsh.

The next story I read was The Case of the Tragedies in the Greek Room by Sax Rohmer, which caught my attention because I saw in the introduction where Edwards chose it because it was the best example of what he inferred was a rather bad lot.  It features a psychic detective named Moris Klaw.  It was notable for being hilariously bad from start to finish; truly overblown and completely unbelievable, but in the manner that leaves you amused rather than disgusted (mostly).

The third story was Nicholas Olde's The Invisible Weapon which is built around that (now) classic motif of... read it to find out.  No spoilers here.  But it was written well enough to be enjoyable, if not 'oh wow' memorable.

I'm really looking forward to reading the rest of these stories - hopefully soon.  But that's the great thing about anthologies like these, they keep on giving for ages afterwards if you want them to.