The Inheritor's Powder: A Tale of Arsenic, Murder, and the New Forensic Science 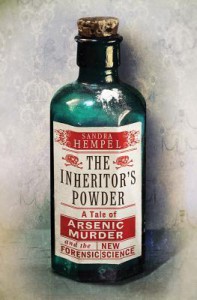 Overall, this was good.  Hempel frames the rudimentary beginnings of forensic science - specifically toxicology - within the narrative of a famous poisoning case of the time, that of the Bodle family, which resulted in the death of George Bodle, the rather wealthy patriarch.

She sets up a rather thrilling beginning; I was at once riveted to the story as we're walked through the morning of the poisoning.  I very much wanted to know what was going to happen next.

And this is where Hempel falters.  Because just when you're on the edge of your seat, she launches into the science, the scientists and the research of the time, which leads her into side avenues of other contemporary cases. These are also interesting, but she throws so many names and events at the reader in these side alleys to her narrative, that by the time she wends her way back to the Bodles, I've lost track of who everybody was.

This becomes slightly less of a problem in the second half of the book, as things become too exciting for Hempel to get sidetracked, but it's still a regular occurrence.  And the thing is, these deviations are the part where all the interesting science-y bits are; about all the attempts at trying to detect arsenic definitively; how Marsh was inspired to create his game-changing test, and how it wasn't *quite* the game-changer so many pinned their hopes on.  And it's all good stuff.  But Hempel is a victim of her own success at spinning a gripping narrative; I started out wanting the science-y bits but ended up just wanting to know who killed George Bodle.

Worth reading, definitely.  But it's not necessarily an easy read for unexpected reasons.