The Invention of Nature: The Adventures of Alexander Von Humboldt 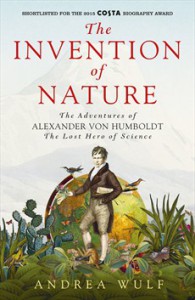 The Lost Hero of Science is not hyperbole.  It's one of the great tragedies of history that this man's name is no longer on the tip of every man, woman and child's tongue (at least in the English speaking world).

I don't know where to begin, but to put it as concisely as possible, read any headline about environmental science today and Humboldt called it almost 200 years ago.  Deforestation: check.  Desertification: check. The long term devastation of monoculture: check.  Climate change: check.  At the more extreme ends, he was calling for the creation of the Panama canal decades before it was a glint in America's eye and he insisted that even rocks contain life (they do - look it up).

Humboldt was acerbic, impatient, and had a level of energy few can imagine without pharmaceutical assistance.  He devoted his life in every way to science and nature, eschewing most personal relationships in favour of relentless study, but he was also generous with his knowledge and money - much to the betterment of the world and the detriment of his finances.  He was in almost every way a true hero, as the title claims, and unarguably a role-model for more than just fellow scientists.  Without Humboldt we very likely would not have Darwin (Darwin himself said without Humboldt, he would not have found his calling on the Beagle).  Without Humboldt we wouldn't have those lines on weather maps, either (isotherms/isobars).

In short, his life was incredible and Wulf does a better than creditable job illustrating not only his adventures and indefatigable levels of energy, but his impact on the world; not just scientists, but artists, authors, poets and politicians.  She writes a very readable narrative and communicates what must have been an enormous amount of information in a way that remains coherent throughout.  She remains objective but is never dry or academic.  My half-star demerit is only because some of the chapters devoted to others I found less interesting that the star of the book himself.

(This was a BookLikes-opoly Free Friday Read for July 7th and was 341 pages (minus the various appendices and index).