Writing All Wrongs (Books by the Bay Mystery, #7) 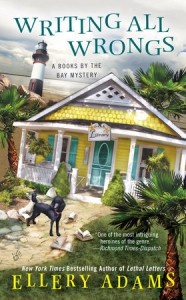 I need the meh emoticon!  There are so many likeable aspects to this book, but the characters just fail to really hook me.  They're all so very placid, even when they're supposed to be angry or thrilled with happiness.  If the energy of a book could be graphed, this one's would be a flat line.

Saying that, the writing isn't bad; Adams is really good at writing a story if you're not a character driven reader.  The editing was crap, but I expect no better from Berkley; they totally screwed up a Native American myth early in this book by using the wrong names at the wrong points of the story.

The North Carolina history she incorporates into the story is by far the most interesting part of the book as a whole.  The murder plotting was a cool idea, but the ending was just tragic, making it difficult to find the wrap up satisfying in any way.  Generally this would get Adams bonus points (for going off the beaten path of the cozy formula) but I really did not like the ending.

I think this is going to be one of those series I'm going to wish the best to and part company; it's not bad for a cozy series at all, but it's just not a good fit for me.