Oranges and Lemons: Rhymes from Past Times 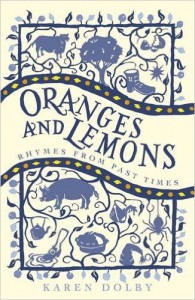 I'm going to start by saying this is an excellent collection of nursery rhymes.  All the rhymes from my childhood, both remembered and forgotten were here (I totally forgot that London Bridges falling down was also a game until I read it here), as well as many that were new to me.

Where I thought the book stumbled, was the author's attempt to include a bit of history for each one.  Some of the rhymes are well documented, and these are interesting.  Some of them just don't have any known origins and to the author's credit, she's forthright when no history is to be had, or what is is purely speculative.  But the vast majority of the rhymes fall in between with several theories, a bit of scant information, and far too much speculating.  And all that speculating can be summed up by saying "when in doubt, blame it on the aristocracy".

It seems 90% of the rhymes children grew up with are subversive pokes at royalty throughout the ages.  Which would be interesting, if there were any documentation to back the assertions up, but if there is, the author wasn't privy it.  I find it hard to believe myself, that anyone would spend their time and creativity writing up clever little ditties about kings and queens for children that weren't going to get it - or care about it if they did.

About half way through I started to have a similar reaction to these attempts at historical context as I do about people trying to explain art.  Sometimes it's just a water-lily, or in this case, Little Boy Blue just needed a nap.

The book is a keeper for the collection it contains and the index it has in the back, making them easy to find.  But if you're looking for the historical angle, I think it's a bit disappointing.