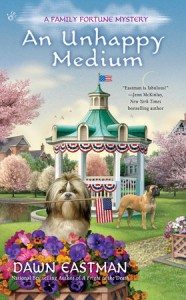 If a book can hold your attention when you're in a slump, it can't be half bad right?

I enjoy this series as it's one of the few rational cozy series out there; most of the characters are likeable, the small town setting is vivid and the plotting is usually pretty good.  Clyde is a strong, normally intelligent main character trying to come to grips with a psychic gift she's ignored most of her life and her family is just crazy enough to be realistic.  Mac is a great romantic lead who doesn't define himself by his ability to alpha male everyone around him.

This book's plotting, though, wasn't quite as strong as the others.  I'm left with the impression that the mystery itself was just an excuse to further Clyde's family's story arc along.  To string the mystery out, the author made Clyde dim: her visions were fairly easy for the reader to interpret as events unfolded, but Clyde remained clueless and the final denouement revealed a culprit that was never a suspect either for anyone in the book or the reader as there simply wasn't any forward progression after the initial murder scene.

I was going to ding the rating for this, but my rating reflects my enjoyment and I did enjoy this book; the character sub-story was interesting enough that I didn't miss what was missing from the mystery itself.