Mother Tongue: The Story of the English Language 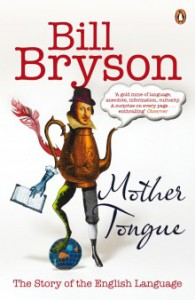 I'm partial to Bill Bryson's writing to start with - I enjoy his subtle and not-so-subtle snark.  As an expat who often gets comments about her accent, word choice, or idiom use and is sometimes forced to defend the same, I've become interested in the English language across different cultures, so I was predisposed to really enjoy Mother Tongue.

And I did.  The beginning was less-interesting, although I still learned a lot (as soon as anyone starts talking about invasions, my eyes tend to glaze a bit).  There were a few things he didn't get exactly right; times when he used specific examples of dialect or word choices that I knew from personal experience were not as sweeping as he made them sound.  For example: I grew up primarily in Florida but spent years in Georgia and travelling to family in South Carolina and never once did I hear the word "Ladybird" used instead of "Ladybug".  I didn't hear ladybird used until I moved to Australia.

The last half of the book was easily more interesting as these chapters covered the differences between UK and American English, swearing and word games.  Bryson doesn't pull any punches in the section that outlines the word differences between UK and US - many of the words the US is credited for creating are in fact very old UK words that had fallen out of fashion (and memory) in England. The last half flew by and DH got an earful as I read passage after passage out loud.

I'd definitely recommend it for those that want a light overview of the history of the english language.